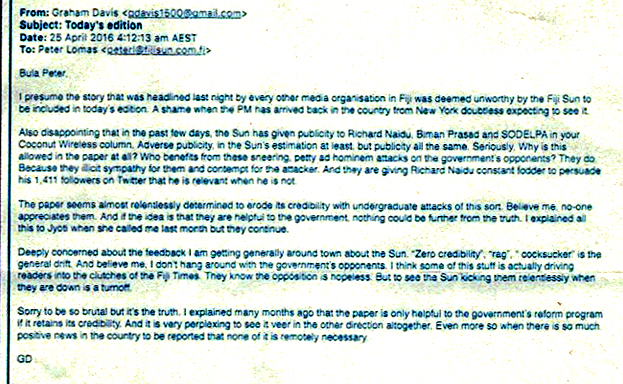 Fijileaks was hacked following its publication of my paper Digital Buturaki, which was presented on July 16 at the World Journalism Education Congress in Auckland. Qorvis must be desperate to suppress it. I will thus reprint it on my blog. Hack this, Qorvis.

A PAPER PRESENTED TO THE WORLD JOURNALISM EDUCATION CONGRESS, ,


A series of coups beset following its independence from in 1970. Some blamed the press, segments of which had been critical of the government, for fomenting a coup in 2000 (Singh, T.R., 2011). According to Robie (2003: 104), ‘Many powerful institutions, such as the Methodist Church in Fiji, and politicians in the Pacific believe there is no place for a Western-style free media and it should be held in check by Government legislation’. Self-regulation of the press by the Fiji Media Council was criticized as ineffective (Robie, 2004). A clampdown on press freedom by the military, which took control of the country in a 2006 coup, saw a new type of publication emerge in response. Enabled by websites such as blogger.com which offered free software and hosting of personal diaries, web logs or ‘blogs’ became popular at the millennium. Pro-democracy blogs in post-coup were almost exclusively anonymous, however, as anyone caught spreading anti-government sentiment risked being arrested and beaten by the military. It detained several suspected bloggers and also put pressure on the country’s telecommunications provider Fintel to block blogger.com. In response, a group of bloggers from offered to host Fijian blogs on their servers (Fiji Times, 2007). According to Foster, by cracking down on press freedom, the military ‘unleashed’ the blogs. The resulting ‘public relations nightmare’, she concluded, proved worse for the regime’s image than a free press would have.
The blogs’ no-holds-barred approach to military criticism picked holes in media coverage of the crisis, with blogs running stories detailing alleged military abuse as well as releasing several confidential documents (Foster, 2007: 47–48).
Not all political blogs in post-coup were anti-regime, however. In early 2009, New Zealand resident Crosbie Walsh began a blog he called Fiji: The Way it Was, Is and Can Be, partly in response to what he saw as biased reporting on Fiji in the mainstream media of his country. A retired professor from the University of the South Pacific (USP) in , Walsh also published a study in 2010 which catalogued 72 known political blogs in , of which 42 were active. ‘Fifty-three were anti [-government] – 19 extremely so; 15 were more or less ‘neutral’, and three were pro-government’ (Walsh, 2010: 164). Walsh deemed his own blog ‘mildly pro-government’, compared to blogs such as Coup 4.5, which actively incited unrest. ‘The anti-government blogs, hailed by coup opponents as advocates of democracy, are little more than agents of uncritical dissent’ (Walsh, 2010: 174). Coup 4.5 was among the most popular blogs, noted Walsh, with a ‘staggering’ 60,000 visitors in November 2009 compared with 30,000 visitors to his own blog over a longer period (Walsh, 2010: 158).
In April 2009, ’s ruled the 2006 coup unconstitutional, prompting the government to abrogate the constitution, sack the judiciary, declare martial law, and clamp down on civil rights. Several foreign journalists were deported and censors were installed in newsrooms to prevent negative news about the government being published. Blog activity spiked in an attempt to fill the news vacuum, prompting a renewed government crackdown. The pro-regime blog Real Fiji News published the names of several prominent residents it claimed were behind the anti-government blog Raw Fiji News, including the editor of the Fiji Times and three lawyers, who were arrested and detained briefly for questioning (Merritt, 2009). In 2010, the regime appointed former Fairfax Media advertising executive Sharon Smith Johns as Permanent Secretary for Information, making her admittedly the country’s ‘chief censor and media strategist’ (Davis, 2010). A Media Industry Development Decree (Media Decree) was enacted by the military government the same year. It provided for fines of up to F$1,000 for journalists found in contravention of its guidelines, which increased to F$25,000 for publishers or editors and F$100,000 for media organisations (Foster, 2010; Singh, S. 2010).
In February 2011, Australian journalist Graham Davis began a blog he called Grubsheet after his production company Grubstreet. It covered a range of topics for its first year, but by early 2012 it began to focus on politics almost exclusively. Davis, who was born in Fiji, began that focus with a blog entry that criticised Coup 4.5 for alleging that Muslims were ‘colonising’ Fiji at the behest of Bainimarama’s right-hand man, Attorney-General Aiyaz Sayed-Khaiyum, who was a Muslim. ‘This grubby little offering isn’t just inflammatory but utterly false’, wrote . ‘Simply put, Coup 4.5 – with this base offering – has become the local equivalent of a Nazi hate sheet’ (, 2012a). The blog entry was reprinted in the pro-regime Fiji Sun newspaper, as well as on Auckland University of Technology’s Pacific Scoop and Pacific Media Centre websites, and on the blogs of Walsh and AUT journalism educator David Robie. ‘Who are these people?’ asked of the contributors to Coup 4.5. A few wrote under their own names, he noted, including former Fiji Sun investigative reporter Victor Lal, who lived in England, and economist Wadan Narsey, who had been forced to resign his teaching position at the USP as a result of his outspoken opposition to the military government. Most, noted , did not.
They’re always anonymous but are said to be a group of Fiji journalists running their site out of Auckland, with contributions from members of the deposed SDL government, ex civil servants and a hard core of anti-regime ‘human rights’ advocates. . . . The wonder is that some of 4.5’s content is written by respected journalists and academics who are Indo-Fijians to boot (, 2012a).

Qorvis Communications
In October 2011, the regime contracted with public relations company Qorvis Communications at a cost of US$40,000 per month. According to Bainimarama (2011), the purpose was ‘to assist with training and support for our Ministry of Information – to ensure its operations take into account advances in social media, the Internet and best practices regarding the media’. journalist Michael Field, who was among the journalists barred from for reporting critically on the regime, pointed out that Qorvis had a sinister reputation in other parts of the world where it operated. ‘Qorvis specialises in putting a spin on dictators like those of and who resisted Arab Spring. . . . Hiring spin-doctors is a well-walked road for dictators who work on their image in and at the United Nations’ (Field, 2011). American journalist Anna Lenzer, who had been arrested on a recent assignment to , noted in the Huffington Post ‘the Fijian junta’s exploding internet and social media presence in the weeks since Qorvis began its work’ (Lenzer, 2011). The Huffington Post had earlier questioned the tactics employed by Qorvis on behalf of the dictatorship in Bahrain. ‘Beyond disappearing bloggers and rights activists, also tries to disappear criticism’, it noted. ‘Most of the U.S.-based fake tweeting, fake blogging (flogging), and online manipulation is carried out from inside Qorvis Communication’s “Geo-Political Solutions” division’ (Halvorssen, 2011).
More so than intimidation, violence, and disappearances, the most important tool for dictatorships across the world is the discrediting of critics. . . . Oppressive governments are threatened by public exposure, and this means that it’s not just human rights defenders but also bloggers, opinion journalists, and civil society activists who are regularly and viciously maligned (Halvorssen, 2011).

The Huffington Post also reported in 2011 that an exodus of Qorvis operatives had taken place over the firm’s unsavoury tactics and clients. In a space of two months, it noted, more than a third of the partners at Qorvis had left the firm, partly because of its work on behalf of such clients as , , and . ‘I just have trouble working with despotic dictators killing their own people’, one former Qorvis insider said (Baram, 2011).
Read more »
Posted by Marc Edge at 6:24 PM 1 comment: 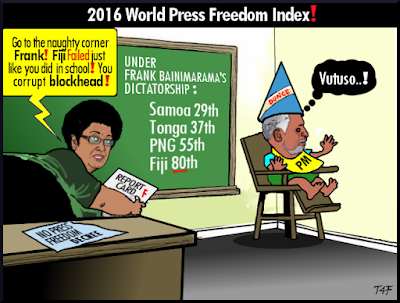