Fiji's dictator might be able to keep the country's media from asking pesky questions about his recent manipulation of the constitutional process (such as, WTF?), but the international press is not so easily cowed. The esteemed UK magazine The Economist has weighed in on Frank's machinations and predicts that the country's "strongman" has already overplayed his hand. 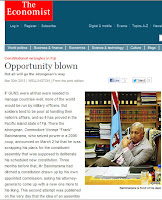 Under the headline " blown,"respected publication quips that "soldiers tend to be poor at handling their nation’s affairs, and so it has proved in the Pacific island state of Fiji."

By firmly reasserting his control, Mr Bainimarama may perhaps have avoided the risk of troublesome upstarts seizing control over the transition. But he has also blown his chance to preside over the creation of a new political order that is durable and legitimate.

Such was the euphoria around the process that the armed forces, in their own submission, said that the FCC had triggered “a sense of belonging culminating in a national pride” and a “togetherness which we must continue to foster”.

Under the expert-led constitutional consultations, observed The Economist, troubled "seemed to be enjoying a political renaissance." Then Frank went and blew it because his mile-wide authoritarian streak simply could not truck any semblance of democratic participation. That might mean, after all, someone being allowed to disagree with him and get away with it. Fijians must by now be asking themselves how much the future of their country has been endangered by relying on the wisdom and equanimity -- or lack thereof -- of one self-appointed leader.
Posted by Marc Edge at 2:20 PM