The International Consortium of Investigative Journalists put its long-awaited Offshore Leaks database online a short time ago, and boy has it been busy! You can search it for yourself to see if any of your friends or enemies have money squirreled away in offshore bank accounts. 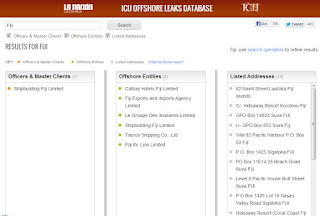 But you'll need a lot of patience, because it keeps going down, no doubt due to all the traffic it is getting. Just keep hitting that "Try Again" button. Publication of the database is making a lot of moneybag types nervous, because stashing loot in offshore accounts is a time-tested method to evade paying taxes on it. According to the Huffington Post, the documents have been used since April to unearth stories about tax evasion by politicians in , , , , and the  Now it has been made public for all to explore. Here's how the ICIJ describes the project:

Drawing from a leaked trove of 2.5 million digital files, ICIJ has released a series of groundbreaking stories exposing the individuals behind the covert companies and private trusts based in the , , , and other offshore tax havens. ICIJ’s investigation, the largest in its history, has shaken political and financial institutions from to to .

Now, I know the first question many Fijians are asking. How many offshore accounts does Interim (some say Illegal) Prime Minister Frank Bainimarma have? After all, the very busy Discombobulated Bubu has been working her sources with great effect recently to come up with the startling total of F$1.326 million that Frank has allegedly been paying himself annually in no fewer than 10 ministerial salaries, in addition to his pay as Commander of the Fiji Military. Converted to U.S. dollars, that's more than Obama gets paid. As he's been in the job . . . er, jobs for more than six years now, that would amount to more than F$8 million by now. That's a lotta loot. Do you think he's going to keep it with Westpac or ANZ? Maybe (haha) BSP? After all, he's not going to be able to hold onto power forever (despite what he seems to think), and the day may come when the spotlight is turned on just how he benefited financially from conquering his own country. He might want to have that dough stashed in a safe place overseas.

Right behind him is Attorney-General Aiyaz Sayed-Khaiyum, who according to the Bubu is raking in eight ministerial salaries totaling F$1.03 million, including ironically as Minister for Anti-Corruption. These revelations have proven highly embarrassing for the regime, especially as it is requiring anyone who runs for political office to reveal not only their income and assets, but also those of close relatives. Meanwhile, of course, the regime has been reluctant to disclose just how much its top members have been benefiting from ruling Fiji. The hypocrisy is palpable. The Bubu has been busy trying to get to the bottom of just how the money is funneled to the six regime bosos who reportedly run Fiji. It is apparently done through the murky Hawala system favored by Muslims and in this case run by Khaiyum's Aunty Nur in Auckland.

That's why the publication of ICIJ's database was awaited with great anticipation by regime watchers, but they will likely be disappointed if the results of my first few simple keyword searches are any indication. Typing "Bainimarama" into the search box comes up with nothing. Of course, the account needn't be in his name. That would be too obvious. It could be in a company created to keep the money in. A favorite trick to avoid detection is a "numbered" company which doesn't even have a name, just a number. In Frank's case it's prolly something like 123456 Ltd. Hmmm. Nothing for that either. Aiyaz Sayed-Khaiyum does return three hits, but two of them are in Cairo and the other is in Mumbai, so they are likely different ASKs.

In fact, typing Fiji into the search engine returns only 23 hits in total, and several of those are duplicates. There are three categories: Officers & Master Clients, Offshore Entities, and Listed Addresses. Here's what we get for Fiji.

The sole listing for Officers & Master Clients is Shipbuilding Fiji Limited. The six Offshore Entities would ideally equate to the reported six regime bigwigs *in your dreams* but in reality they are:


As for the 16 Listed Addresses, they are as follows, along with the names of the account holders which you get when clicking on the link.


Now, not being a Fijian, these names are not familiar to me. William W. Clarke is a name I recognise as a Suva lawyer. He could be holding the money in trust for a client. As for the rest, readers of this blog may have a better idea of who they are. Of course, the magic of Google could help here. Natinkumar Patel is . . . well, there are a few possibilities. One is connected to the Foundation for the Education of Needy Children in Vladimir Fedorov . . . well, there's one who is a retired Russian ice dancer who won a bronze medal at the 1993 Olympics. Well, obviously this is going to take some sorting. You all can figure it out just as well as I can, prolly better.


UPDATE: Here’s something interesting on a Kelvin John Wade. According to an article in the Melbourne Age on on hearings held by the Costigan Royal Commission, a bookmaker by that name “may have had as many as 40 accounts under false names.” The Costigan commission investigated criminal activities associated with the Painters and Dockers Union and uncovered evidence of tax evasion schemes.

Ramesh Solanki appears to be President of the Fiji Textile, Clothing and Footwear Council.


Swedish national Arne Bjorck was involved in a lawsuit in which alleged in 1995 that he intended to divert a fishing vessel and its catch to instead of .


Peter Ian Knight is an attorney with Cromptons in and a former President of the  Law Society.

There is a Natin Patel with the Asian Development Bank in Suva who is apparently quite the bowler.


Stanley Hancock is Director of Business Development & Investments for Pacific Building Solutions in . He is also a specialist in marketing, business feasibility studies, financing and joint-venture co-ordination with Eco-Consult Pacific.

Hey, this is fun!